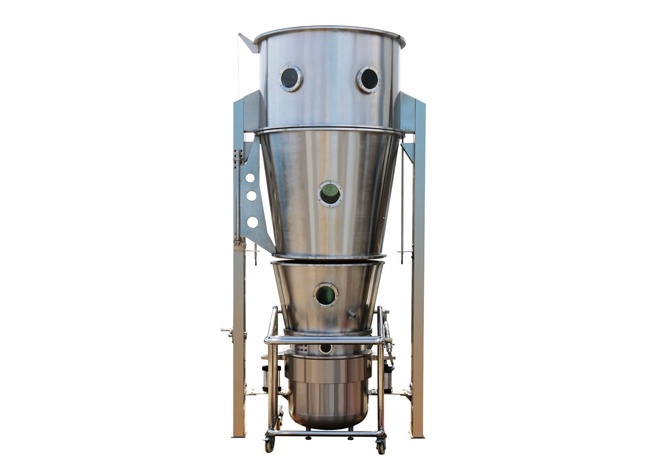 Fluidized bed granulation, also known as one-step granulation, is a method of mixing, granulating and drying conventional wet granulation in a closed container.Fluidized bed pelletizing enables the drug powder to maintain a suspended fluidized state under the action of a bottom-up airflow. The adhesive liquid is sprayed into the fluidized chamber from the upper or lower part, and the powder is reaggregated into particles.

Fluidized bed granulation has many advantages. For example, the dry mixing, wet mixing, stirring, particle molding and drying of materials are all completed in the same fluidized bed equipment, which reduces a lot of operation links and saves production practice.Fluidized bed granulation also allows production to be carried out in a sealed environment, which not only prevents contamination from the outside world, but also reduces the opportunity for operators to come into contact with irritating or toxic drugs and excipients.

In addition, the particles prepared by fluidized bed granulation technology were of uniform particle size, good liquidity and financial pressure formability.It also makes the distribution of drugs that are very low in components more uniform in the prepared particles.It is worth mentioning that the fluidized bed can also produce multilayer and multiphase functional particles.

However, it is a complicated process and influenced by many factors.Such as equipment factors, in the fluidized bed granulator, the air shunt plate and container force particle movement has an impact.The material and shape of the container have more influence on the particle movement.