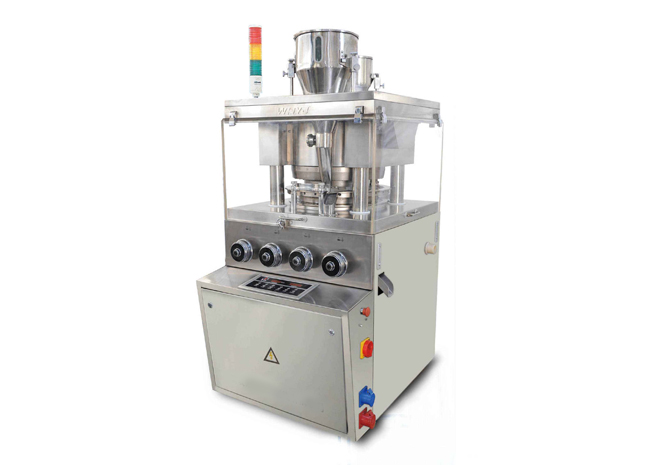 Tablet press refers to a machine that places granular or powdery materials in the die hole and presses them into tablets by punch.

It is reported that drug crushing fineness is not enough, fiber or elastic drug or oil content more and mixed uneven will lead to the phenomenon of loose pieces.It can be overcome by crushing drugs through 100 mesh screen, selecting adhesive with strong viscosity, appropriately increasing the pressure of tablet press and fully mixing oil drug absorbent.

Insufficient amount of adhesive or wetting agent or improper selection, so that the texture of particles loose or uneven distribution of particle size, coarse and fine layering.It can be overcome by using appropriate adhesive or increasing dosage, improving granulation process, stirring soft materials more and mixing even granule.

The moisture content of particles is too little, the excessively dry particles have greater elasticity, the drug containing crystal water in the process of drying particles lose more crystal water, making the particles brittle, easy to loosen the segments.Therefore, the moisture content of granule should be controlled according to different varieties during granulation.If the granule is too dry, spray an appropriate amount of dilute ethanol (50% – 60%), mix and press the tablet.

According to the industry, the phenomenon of loose tablets may also be related to the nature of the drug itself.For example, densified tablets have a certain hardness but are not susceptible to impact and shock.The fluidity of particles is poor and the particles filled into the mold hole are not uniform.Or there are large pieces or particles, debris blocking the scraper and feeding mouth, affect the filling amount.

In addition, the tablet press machine can also affect the tablet press effect.If the pressure is too small, more stamping press head length is not uniform, the speed is too fast or add more or less particles in the hopper.It can be overcome by adjusting the pressure, checking whether the punching die is complete, adjusting the speed, and adding particles frequently to maintain a certain amount of stock in the hopper.

The drug itself is more elastic, fibrous drugs or because of oil content more components.Sugar powder can be added to reduce fiber elasticity, enhance adhesion or increase oil drug absorbent, fully mixed and then pressed tablet.

Improper adhesives or wetting agents or insufficient dosage, particles in the press when adhesion is poor.

The solution is the same as that of pine tablets.

It is reported that the tablet press pressure is too large, rebound large and lobes;If the speed is too fast or the punching die does not meet the requirements, the punching head is long and short, the hole of the middle die is worn, the middle die is larger than the upper and lower part, or the punching head rolls inwards, all of these can cause the tablet ejecting to cause the split.Adjust pressure and speed, improve die matching, check and exchange in time.

In addition, the low room temperature and humidity of the tablet chamber are easy to cause the lobes, especially the drugs with poor viscosity are easy to produce.Adjusting the air conditioning system can be solved.